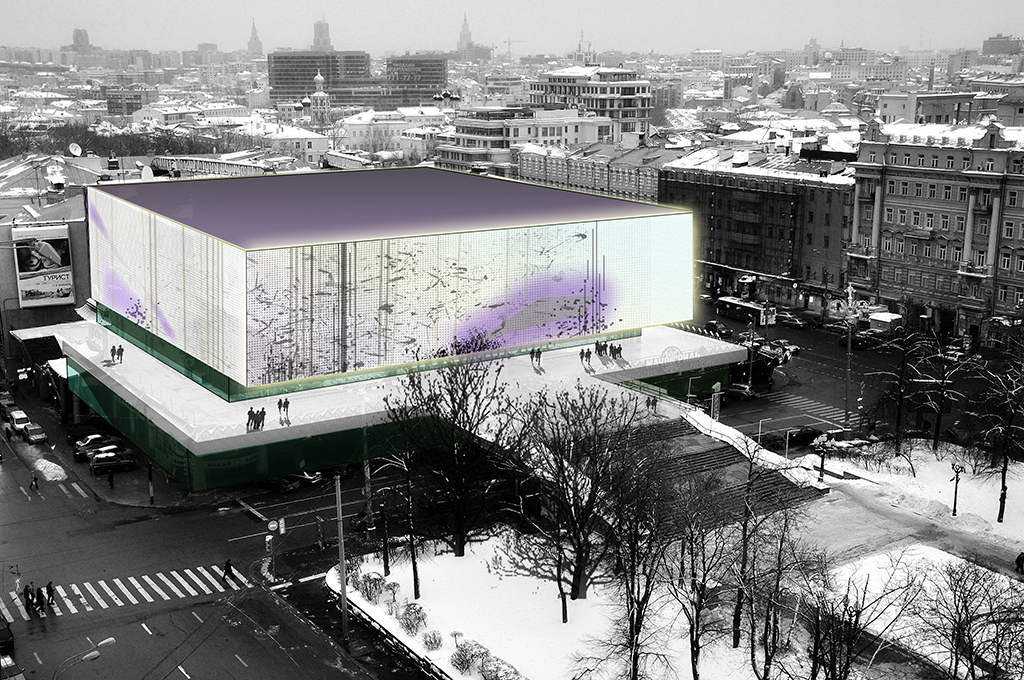 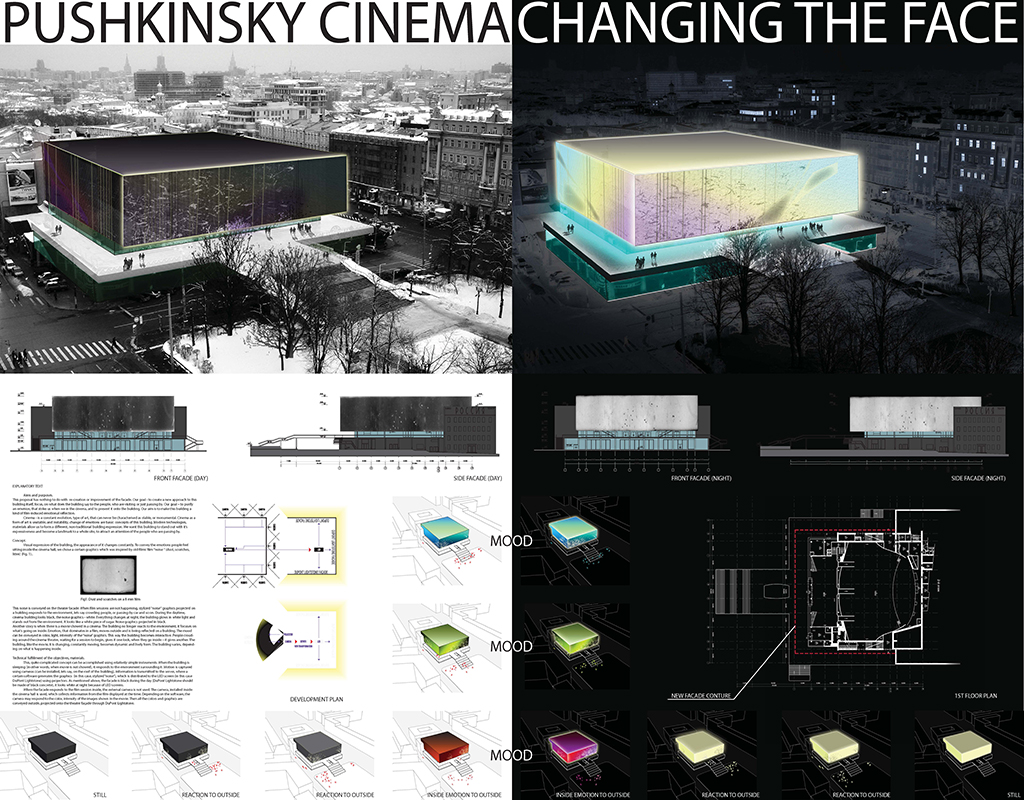 This proposal has nothing to do with  re-creation or improvement of the facade. Our goal – to create a new approach to this building itself, focus, on what does the building say to the people, who are visiting or just passing by. Our goal – to purify an emotion, that strike us when we in the cinema, and to present it onto the building. Our aim is to make this building a kind of film-induced emotional reflection.
Cinema – is a constant evolution, type of art, that can never be characterised as stable, or monumental. Cinema as a form of art is unstable, and instability, change of emotions are basic  concepts of this building. Modern technologies, materials allow us to form a different, non-traditional building expression. We want this building to stand out with it’s expressiveness and become a landmark to a whole site, to attract an attention of the people who are passing by.

Visual expression of the building, the appearance of it changes constantly. To convey the emotions people feel sitting inside the cinema hall, we chose a certain graphics which was inspired by old films’ film “noise ” (dust, scratches, litter) (Fig. 1)..

Fig1. Dust and scratches on a 8 mm film

This noise is conveyed on the theater facade. When film sessions are not happening, stylized “noise” graphics projected on a building responds to the environment, lets say crowding people, or passing-by car and so on. During the daytime, cinema building looks black, the noise graphics – white. Everything changes at night, the building glows in white light and stands out from the environment. It looks like a white piece of sugar. Noise graphics projected in black.

Another story is when there is a movie showed in a cinema. The building no longer reacts to the environment, it focuses on what’s going on inside. Emotion, that dominates in a film, moves outside and is being reflected on a building. The mood can be conveyed in color, light, intensity of the “noise” graphics. This way the building becomes interactive. People crouding around the cinema theater, waiting for a session to begin, gives it one look, when they go inside – it gives another. The building, like the movie, it is changing, constantly moving, becomes dynamic and lively form. The building varies, depending on what is happening inside.

Technical fulfillment of the objectives, materials.

This, quite complicated concept can be accomplished using relatively simple instruments. When the building is sleeping (in other words, when movie is not showed), it responds to the environment surrounding it. Motion is captured using cameras (can be installed, lets say, on the roof of the building), information is transmitted to the server, where a certain software generates the graphics  (in this case, stylized “noise”), which is distributed to the LED screen (in this case DuPont Lightstone) using projectors. As mentioned above, the facade is black during the day (DuPont Lightstone should be made of black concrete), it looks white at night because of LED screens.
When the facade responds to the film session inside, the external camera is not used. The camera, installed inside the cinema hall is used, which collects information from the film displayed at the time. Depending on the software, the camera may respond to the color, intensity of the images shown in the movie. Then all the colors and graphics are conveyed outside, projected onto the theater façade through DuPont Lightstone. (Fig. 2). 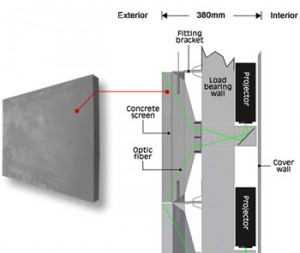